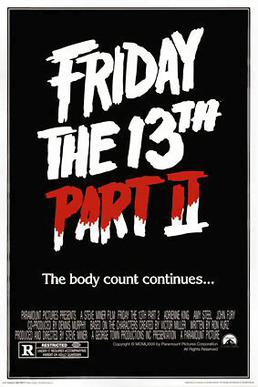 Camp Crystal Lake Is closed. The Cabin’s have been boarded over. The canoes have been pulled from the lake. The bodies removed from the out house. The blood stains cleaned from the walls.

The campers are now all burned, buried or butchered. Camp Crystal Lake is no more.

The lake is quiet.

As of late though, there have been stirrings. Dark whispers in the blackness of the night. A shape has been seen moving down by the lake. Animals have been turning up in pieces. Some say a bear. Some say a rabid dog needing to be put down.

Still others say, it’s something else.

Or more appropriately, someone else.

Some of the old timers say, that it’s the boy. That Voorhees boy. But as every one knows, he drowned. A long, long time ago. It can’t be him. How could it? How could a boy survive that. How could he live that long on the meat of the land and nothing else. Impossible.

Still… Things have been happening. And worse, Camp Crystal Lake isn’t the only campground that shares the shore of Crystal Lake. There are others.

And someone is watching them.

Some one will make them pay for not watching that very special boy so many years ago.

It’s Friday the 13th again, and tonight, Someone will DIE.

Amy Steel plays our Heroine Ginny, and John Furey plays our Hero Paul. The high spot of Amy’s career was in the movie April Fool’s Day in which she plays Kit. Other then that she has had a career centered mainly around TV, most notably in an excellent made for TV remake of the classic film, What Ever Happened to Baby Jane. John has had a mostly lackluster career, the high spots of which include a spot on a soap opera and a role on the wonderful Showtime drama Queer as Folk.

The role of practical joker Ted was done by Stuart Charno. Born in Queens New York in September of 1956, Stu has had a small but interesting filmography. He had very memorable (to me anyway) guest appearances in MASH and Newhart. The funny thing is when ever I watch this movie I can see him sitting there in his cot in the 4077’s patient area wrapped in bandages. He also had a recurring role in the very enjoyable and underrated TV show Chicago Hope. A show that I think would still be on if it hadn’t been put up against the already popular ER!! He was also Warren in the very funny Young Doctors in Love, A Crime Photographer in the abysmal Sleepwalkers, a vampire cabin boy in the film Once Bitten, a nerdy guy in Modern Girls, Just one of the guy’s in Just one of the Guys, and finally he was Vandenberg in the John Carpenter Stephen King Classic, Christine.

Mark, one of my favorite and most sympathetic characters in the movie, was played by Tom Mcbride. Tom also had a role in Remo Williams The Adventure begins. A vastly underrated action comedy. Interestingly enough Tom also stood in as the Marlboro man on several New York billboards. Tom sadly passed away of AIDs complications on the 24th of September 1995.

Walt Gorney IS Crazy Ralph. In part two he reprises his stellar role set up in the first movie. He was born on the 14 of march 1914 in Nevada, and he died of cancer on June 6, 1989. Usually he is only cast as an extra, and has had very few film roles even in that capacity. This is defiantly the biggest and brightest moment in his entire film career.

The original Jason Voorhees was played by unknown actor Warrington Gillette. His only other role was that of Stanley in the 1982 film Time Walkers.

Adrienne King of Friday the 13th part one fame reprises her role from the first movie.

Directed by Steve Miner. Steve went on to direct part three of the Friday the 13th series, as well as directing Halloween H20. He also directed House, Soul Man, Forever Young, Lake Placid and the film Warlock. He’s also worked on numerous TV shows including the Wonder Years, Smallville, Felicity, Dawson’s Creek, and the vastly underrated Chicago Hope. Plus he was the producer for the Original Friday the 13th film.

Written By Ron Kurz. Ron also wrote… Er… Nothing? Er… Yeah. It appears this is his only hit. Of any kind. Poor guy.

This film has one of the longest pre-credit sequences in cinematic history, nearly 15 minutes in some versions.

The killer has the same look as the killer in the classic film The Town That Dreaded Sundown.

Without slipping a spoiler into this, One of the actors deaths occurred off screen due to the fact that they quit the film just before filming their final shot.

ABOUT CAMP BLOOD: “You don’t want to hear about it, Not before Lunch”

As far as sequels go, this is not a great sequel. Now, don’t get me wrong, I’m not saying it’s a bad sequel, it’s just not a great one. Truth be told, it’s not even a very good one. It has it’s moments, but all in all, those moments are few and far between.

The greatest thing about this movie, is that it gives us the birth of a horror Icon. We leave behind that faceless, formless, very human killer from the first movie, and bring out Jason. Granted, it’s not yet the Jason we all know and love. For one thing this Jason is far more intelligent then the Jasons in the later movies.

Maybe intelligent isn’t the word. Maybe the right word is more HUMAN Jason Voorhees then the later movies. We don’t yet have the gibbering idiot of the third movie, nor do we have the tireless robotic killer of the later movies. What we have here is a very human killer who takes the time to do little things like remove kettles from the stove before they boil over, Just after killing someone.

I think maybe, that if we had taken this Jason and worked with him a little more, we would have had a far different series of movies. Is that a good thing? I’m not sure. To tell the truth as much as I enjoy some of the little human touches of this Jason, I’m not sure I enjoy him as a killer.<p>
This movie is a film in transition. We are moving away from the “shadow figure” of the first film, and towards the bull in china shop killer of the later movies. I really think that transition hurts this movie. Someone somewhere knew what they should do with Jason. Some one saw enough of his future in him, to make him awkward. Too much of the old mixed with too much of the new. In this flick we have a Jason who is trying to be like the killer in the first movie.

In my opinion, it just plain doesn’t work. He’s uncomfortable in the calculating “Shadow Killer” role. If the sweater doesn’t fit, don’t wear it. Fortunately for the series, someone figured it out later on and progressed Jason into his own character.

One of the things that annoys me about this film is the change in Jason. I know I keep obsessing about that, but it’s the key to this movie. Changing from one type of movie to another type is what this films all about.<p>
The changes I’m referring to though, comes halfway through the episode. When Jason finally steps from the shadows and we get to see him in all his bag headed glory. The Jason for the first half stalks the shadow. Easily sneaks up on people and dispatches with a moment hesitation.

Yet, when he steps from the shadows he becomes a boob. An awkward clumsy boob. He falls inappropriately to give the heroine time to get away. He misses his mark by miles when he jumps from shadows. Whatever it takes to prolong the end of the movie fifteen more minutes is done, Damn it all what it does to the character.

Most of the victims I could really care less about. Same old cookie cutter camp counselors. There are though, a few exceptions. Two to be exact. I won’t go into it because I don’t want to spoil it, but there are two that I like quite a bit. They come off as innocent instead of brash. Their pending sex scene comes off as sweet instead of wanton. They are probably the closest in the entire series to characters I actually care about.

The dialogue in this movie cracks me up. It really does. They tried to make “real” small talk instead of the uniform movie small talk. It’s just funny seeing these “teenagers” saying lines like “Beethoven’s Last Movement” and chuckle like they were kids.

For all it’s negative, I still find this movie enjoyable and endearing to watch. I strongly suspect though that it’s more for my emotional attachment to the series then for any merit the movie actually carries. <p>
In many ways, this movie completely fails to capitalize on the great movie that came before it. It feels rushed, ill-conceived, and badly planned. Still, if you enjoy slasher films, theirs still a few little gems of enjoyment hidden deep with in the movie’s depths. Just don’t look too hard. If you do, you’re bound to see all the faults bubbling to the surface first.

I recommend this movie to any fan of Slasher movies in general. And especially to completist fans of the Friday series.

About kylethoreau 146 Articles
KyleThoreau is a time-traveling axe murderer from the 1800’s. He stopped in the 2000’s because he ran out of the secret time-travel juice that the cyborg clone of Abe Lincoln gave him. He must now find the clone of Abe to return to his time-travel duties. In the meantime he has decided to report on geeky news and read comic books.

I suppose you have a better thought on the subject? Cancel reply

This site uses Akismet to reduce spam. Learn how your comment data is processed.